A trip to Mundaring

No, this entry has nothing to do with Lil' Caesars as much as I would like to gulp down a dessert pizza... Ok I lied, we tried going there but it didn't open til 4pm so we went home..

But before all that... MY RABBIT TRIP TO CHECK OUR BABY BUNNIES!!!! with Robert and Felicia!! So I finally get to check out my baby bunnies, after a handful of emails, but they didn't have any orange babies in the litter, so I'm waiting for the next lot of kits to arrive and hopefully there will be some orange babies!@! 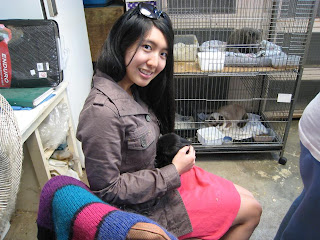 This is me and a black bunny! The lady was really nice, I got to hold an even smaller bunny earlier and she kept giving me bunnies to hold and pet and take pictures of :D. Apparently the majority of the minilops in WA are all hers! She bred dwarf lops and the smallest of the lot was bred together and so on and so forth. 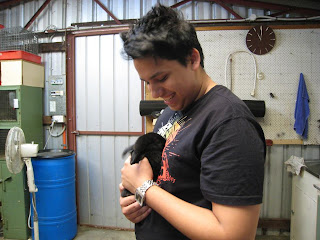 This is robbie with the black bunny, isn't he adorable! This was was ready to go, it's 8 weeks old, but I didn't want a black one, although it was so obedient and cute!! 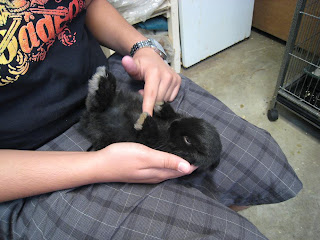 If you lie a bunny straight on its back, you can put it in a trance, I've never seen this done before but the lady was showing us with another bunny. What you do is you hold its head firmly and lay it on its back and stroke its tummy and it will just lay there very still. She told us that with some bunnies, they would be so deep in a trance that you could perform procedures on it. 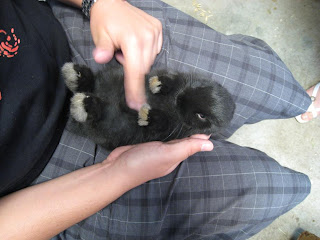 Another picture of bunny on its back. 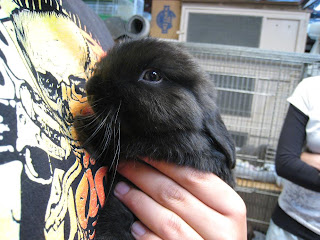 I love this picture, the ears of the lop are the custest feature! 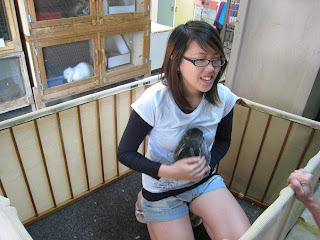 Felicia's rabbit doesn't like being held and the lady gave her some tips on how to handle the rabbit and train it to be obedient, etc. (Fel in a pen!) 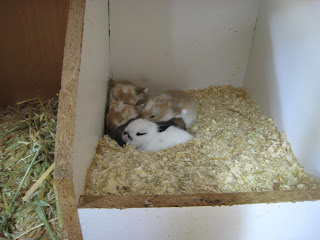 Orange butteryfly babies!!! I WANTTT!!! but they were already reserved. She had 39 bookings and 20 rabbits to sell haha. The white bunny with the black ears and eyes and nose is because she bred two butterfly bunnies together. 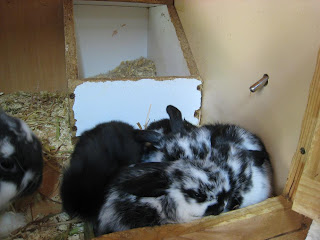 Black butterfly bunnies!!! how cute! it's like the bunny version of dalmations! 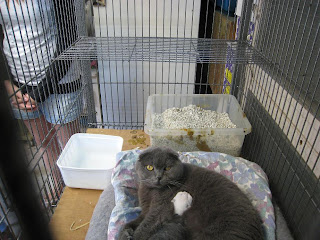 Ahhh, not only did the rabbit lady have bunnies, she also had different breeds of cats (British shorthair, scotish fold, ragdoll, can't remember the rest) as well as these chickens that had the prettiest feathers. She had a puffy chicken and this other one that looked all puffed up, didn't take pictures, but it was really cute. 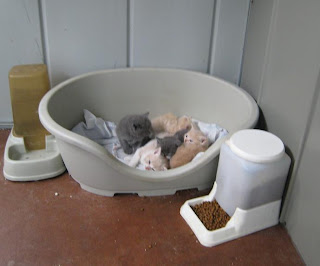 Kitten litter, how tiny are they? 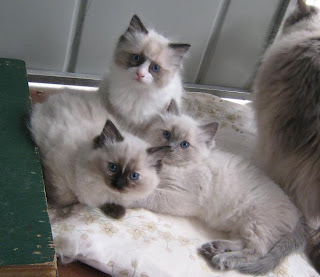 This is one of my favourite pictures, they are so photogenic, such a kodak moment. It'll make a great calender pic! They all have blue eyes!! (Ragdoll kittens)
Posted by Mai at 3:44 PM

they're so cute!
haha i just read your other post abt seeing megan gale!lucky u, i was at home n watched on tv LOL
gdluk for ur remaining exams!!

Well Hi! You obviously really enjoyed yourself with me and all my rabbits, cats and pretty hens, I'm so glad! It was lovely reading this and remembering our fun time together and your lovely enthusiasm.

Perhaps you will get your sweet Little Caesar's pizza next time!