At work today, one of the radiographers called this lady a 'monkey hanger' and I was thinking..what the hell is that? so he explained it to me. The lady was from Hartlepool which is north sea port of England (which makes her Hartlepudian haha) and according to some folk story, during the Napoleonic war, a french ship came to invade Hartlepool but blew up in an explosion just off shore. The french had a mascot which was a monkey in a french uniform and it was the only thing that survived. The Hartlepudians being fishermen haven't seen a monkey before and thought that it was a french spy, so it was hung up on the beach and sentenced to death. Henceforth, the term 'Monkey hanger'. :)

Learn something new everyday!
Posted by Mai at 10:31 PM 1 comment:

On Saturday afternoon, I went to the Merchant Tea and Coffee House in Fremantle with a couple of friends from Uni. We were meant to go to Norfolk Pub but we just wanted some coffee and cake so we decided to look around for a cafe. We all sat down and ordered our food, I don't think anyone actually ended up getting coffee. I must admit the food there wasn't spectacular, I ordered hot chocolate and a choc mint fudge cake which was alright. My friend who loves her Chai Lattes said that they make the worse Chai lattes ever!! Although we did sneak over to Dome next door to take away carrot cake, that was delicious!

The best cakes are at utopia, Myaree! I also like their bread selections, reminds me of the bakeries in Singapore. The evening ended up in timezone where we took a couple of photo stickers and we won a Minnie mouse toy.
Posted by Mai at 5:20 PM No comments: 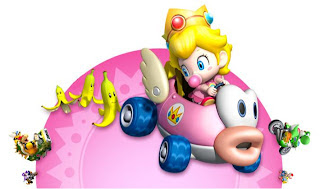 It comes with a Wii Wheel which is heaps of fun. You can also play as your Mii character and play online with 12 other players. If anyone buys it, you can add me/rob as a friend, just ask me for the friend code and we can race :D.

It reminds me of playing Mario Kart at timezone, only downside is..we only have one wii wheel so the other person just plays without it.
Posted by Mai at 2:07 PM 1 comment:

Another smash into the window story

So I could hear this tapping noise in the background whilst i was in my room, on the computer. I thought it might've been the neighbors or something, so I head out of my room to see what was going on and I see this bird just flying straight into the door/window and like walking in a circle and *SMACK* back into the window again. So I'm standing there watching it flying into the window AGAIN and AGAIN like must've been over 10 times or 20 times. So i go and grab my camera phone and decided to film, hence the bad quality and yeah don't have much memory so the video cut out on me. BUT, as you can see, I managed to catch it smashin itself three times agains the glass door/window. DOESNT IT LEARN THE FIRST TIME ROUND?? haha..

Btw, I decided to walk up to the window to scare it away so it doesn't get brain damage.

They're very useful things, if we didn't have bags, what would would we do?

Today i decided to bake some babycakes, using cake mix of course!

Absolutely delicious and looks great too! 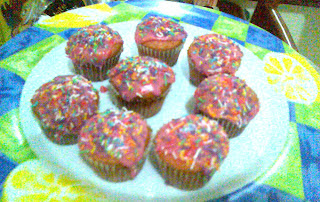 Unfortunately, my brother has borrowed my camera to take to malaysia, so i had to use my phone to take a picture instead.
Posted by Mai at 6:31 PM 2 comments:

Guess what guys I saw the guy from Eskimo Joe at my workplace :D
Not that I recognised him..(the radiographer did) BUT STILL CELEBRITY!! woO! (The guy on the left)
Posted by Mai at 7:36 PM No comments: