Arghhh .. so it's been almost 2 weeks since I've come back from my Europe trip and I haven't posted any entries up but i will do when i get back to Perth. Right now escaping the winter on Christmas Island and catching up with the paros and friends. My camera doesn't wanna load onto the computer so no piccies!!

London: I loved it, wouldn't mind living there. People are friendly, weather was reasonably pleasant while I was there. Great train system.

Paris: Lovely architecture, absolutely beautiful but disliked the bad traffic and some of the people were rude, having said that there were some helpful people as well. Yummy food :)

Enjoy the rest of the holidays while you still can, back to Uni on Monday! woo!~
Posted by Mai at 2:29 PM 3 comments: 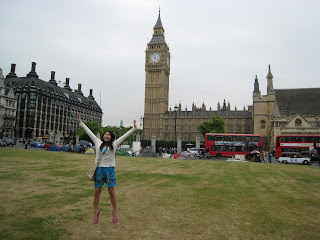 Welcome to London!
Ahhh, been very very lazy and the only net we found was 5 euros for 15 mins which is like almost 9 AU bucks which really isn't worth it! This is going to be sooooooo long but It'll just be a little reminder of the trip for me so feel free not to read it :D! I don;t blame ya!

Day 0: Very Excited, bags packed ready to go!! Despite the gay cold i caught TODAY, so did some last minute shopping for some cold&flu tablets and cough lollies!! Our flight to Dubai was leaving at 10pm and Robbie had taken me and weiferz to the airport 2hours before for checking in. He got us both travel neck pillows which were absolute life savers !! for our 20 hour flight (including transit time haha)!! On the Emirates flight, it was delightful!! We got little bags packed with socks, mini tooth brush and paste and eye patches!! which came in handy!! Our first meal was Chicken Parmagiana!!! SO GOOD!!!

Day 1: It was an 11 hour flight to Dubai and it was pretty disappointing that we didn't get to stop there. Couldn't see much of the city and the airport was so large so no pretty views! Inside was pretty big though! Plenty of shops and relatively cheap! They work with Dirhams and US dollars so I had some US dollars on me! We ran around the shops before heading to our gate for another 6.5 hour trip to London! I thought there was an 8 hour difference with Perth but there was day light saving for Summer so it was only a 7 hour difference! Once we had arrived, we decided to catch a taxi to our hotel, not familiar with the area we thought it was the best option. They have really cute looking cabs in London, they all look the same. 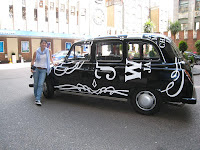 OMG, it costed us an expensive 63 POUNDS ($AU134) however the taxi drivers are well trained in London and he was basically giving us a mini tour and we saw alot of the main areas as we headed towards Imperial Hotel where we were staying! The weather was around 20ish degrees and was nice and sunny!! Checked in at 2pm and were meant to meet up with the Contiki group at 6pm so we had some time to kill. Decided to walk around the area and visited a couple of souvenior shops and went to the British Museum which was just round the corner from the hotel. We returned to the hotel to get ready and meet up with the group!! So many Americans!! A few Australians and we caught the names of like 3 girls and had dinner at 7:30pm and talked to some Texan ladies. Our tour manager was an Australian!! Me and Weif were trying to work out his accent and didn't realise how familiar it was! We can pick out the American accents, the British accents and we realised when we don't know what it is, it's most likely Australian!! And our bus driver was a Kiwi!!

After dinner with the group we went to a nearby pub called the Porter House and it was rather quiet being a Monday night. Weifers bought me a drink and had an early night, went back to the hotel with these two girls from Florida, Kristie and Liz!!

Day 2: Got up real early, today's itinerary: Bath and Stone Henge!!! Had our free continental breakfast which consisted of Bacon, scrambled eggs. sausages and toast!! Very English! Yumm! We took a two hour trip to the Stonehenge, once we arrived the tour manager played the song 'ice ice baby' and said everytime that song plays you can remember the stonehenge!! We had a audio guided tour and heard some really interesting stories of the sarsen and blue stone rocks. Apparently the blue stones are from Wales and there's mysteries on how they got there and what they are for. The 'Druids' are like these sun worshipping people and we saw one with a white robe with his mobile phone! haha!

A Druid
Next stop! Roman Bath! The tour guide told us a story of how King Edgar had a son that contracted leprosy and was cut off from everyone so he went to the Bath area and met these little pigs which followed him. The poor pigs also contracted leprosy but as they rolled around in this mud which had a spring underneath they were cured so he was like "what de heck" and decided to roll around in the mud as well! He was also cured from the disease and went back to the Kingdom to claim his throne back! What a lovely story. So we went on the Roman Bath tour and we got to taste this spring water that is so-called 'good' for you. Weif said it stank like eggs but I hadn't gotten my sense of smell back yet, so it tasted like water to me!! We had some cornish pasties! from some side cafe and shopped on some of the side markets that were there. It was a 3 hour trip back to the hotel and we had a theme song called 'No rain' by Blindmelon which woke us up everytime it was played! (it was our wake up song)

For dinner, Weif and I went to Brunswick Shopping and ate at an Italian restaurant called Strada and had one of the best spaghetti ever! It was so damn nice! We had intentions of going to the Camden markets but the lady at the Underground told us it closed at 7pm so I'm pretty disappointed because I was told it was a good place so shop, so maybe another time!! All the shops were closing and me and weif didn't feel like going to the pub with the others so we randomly decided to visit Buckingham palace hoping we would see the Queen! We caught the tube to Green park and walked to Buckingham palace where we took some pictures and we wanted to see those fuzzy head guards but it was too late and they had already gone in!! We met two girls who asked us to take their pictures and they were from Italy and we're like "WOW" and they asked us and we said we're from Australia and she goes "That's way more good" HAH sif! Also met these other girls from Sydney that were on vacation. It was like 10pm and it was bright as, the sun didn't set til half past ten!

Day 3: Last day in London!!! Today we got up early to go site-seeing around London!! We saw the London Bridge & London Tower and Stu told us a story of how the Americans bought the London bridge thinking it was the London tower, haha, implying they were stupid which was pretty fun as most of the people were Americans. Also saw the Big Ben & Parliament house and the London Eye. The Westminister Abbey which is a church that Princess Diana & Prince Charles refused to get married in because it's too 'small' but it's friggen huge!!!! Also went past St. Paul's Cathedral and after all those places we were dropped off at Trafalgar square where me, weif and a couple of our newly made friends decided to go off to the Buckingham palace again to see the infamous changing of the guards!!! On the way there, we went past St James palace where WE FINALLY GOT TO TAKE PICS WITH THE FUZZY HEAD GUARDS!!! there were like heaps of people lining up to take pictures with them! haha...they couldn't move and i swear the two of them were trying not to smile/laugh and every once in awhile they would change their gun position whether you were in their way or not. 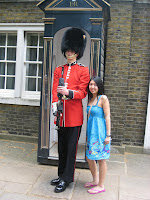 Fuzzy head guards!!
We finally got to Buckingham palace and it was SO DAMN PACKED!! Apparently it's like this everyday (or every second day?) Anyhoos I hardly could see anything the entire time!! A band came in and there were many horses and the fuzzy head guards marched in. Got to film a little bit of it, there were many people on others shoulders!! Next we decided to go see the Big Ben!!! We took lots of pictures with the Big ben and WestMinister Abbey right across it, then we walked and caught the tube to St John;s to see the place. Very delicate carvings, we went in but we weren't allowed to take pictures so we decided not to stay. After that we left our friends and decided to do some last minute souvenir shopping & ate at an Indian restaurant nearby. The Indian food in London is said to be great and it was delicious!!

At night we got ready for the West End Musical: Lord of the Rings. (Musicals are a big thing in London, it's like..going to watch a movie!) Never been to a musical before and did not have much of an expectation for it because it sounded a little bit boring but I like Lord of the rings so decided to go and it was amazingly fantastic! They had the best special effects! There was a bit where Bilbo disappeared and it looked awesome!! The Golem actor was great, there wasnt much singing. It was quite funny as well, overall a great production! Wouldn't mind watching another musical! It ended quite late (3 hours) and went back to the hotel and bedded as tomorrow we were going to PARIS!!