Had work yesterday on ladies floor - doing the change rooms. It's a fairly easy job, u ask them how many items they have, take their clothes from them, pick a number, pat the clothes down and give them the change room.
I did just that to some asian girl, AND DAMN WAS THE POCKETS OF THE BOARDIES BULGY!! I pulled out a pair of bikinis!! and she was like "How did that get in there? Some people are so devious". I'm like meh yeah whatever, go change and she goes, "So can I try those on?" *Points to the bikini* I'm Like "oh hell no n****, these aren't tagged, go grab another one." (NB. slightly exxagerated). So she goes and grabs the same style of bikini as the one she tried to steal...and I grab a colleague of mine and told her I found some untagged bikini in the boardies she wanted to try on...so she goes up to the girl and asks her if she put them in and she lied and said no.. anyhoos she told me she'll get one of the boardies and handed the other one back to me...but I was watching her..she didnt head towards the counter...she put the boardies back on the shelf!! DODGEY!!!!!! The Floor manager came and was lookin for her, but she had left and the Floor manager said I did a good job on catching a thief and she'll tell the boss! ^^; weee~ that's my story of the day...

The Bikini she tried to steal - very patriotic..

On another note, ONE DAY SALE AT CITY BEACH ON SATURDAY SO COME COME COME!! i'm not working so weeee~ probably see what there is :D:D:D working on friday night to put up signs and stuff, so i'll keep u updated! 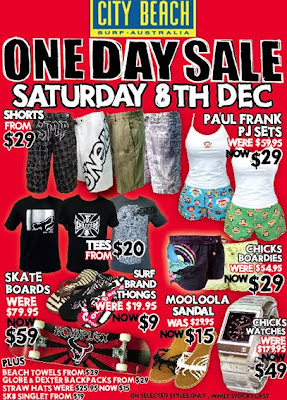 WAHHHHHHH!!! good job inspector mai!!! kekekke i wish something kool like that happened when i was working at myer =P ekkekke

oooo... weif has the same bikini as well she told me she stole it from waves at caro. lol