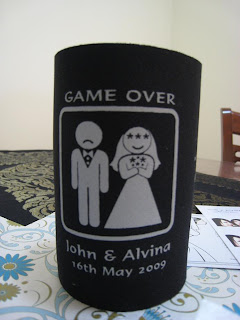 haha i love the stubby holders

On Saturday I attended Alvina's wedding which was held at Sandalford Wines which is in Caversham. The ceremony was held out in the open, on Merlot Lawn and it was rather sunny! They provided the guests with some pretty asian umbrellas to shade them from the heat. 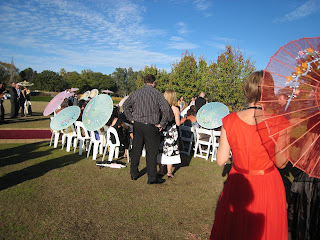 The bride was wearing the traditional white dress of the Western culture whilst a tea ceremony was conducted. Usually a tea ceremony is held at the bride's house and then again at the groom's place but this was a little different, the outdoors of a winery. 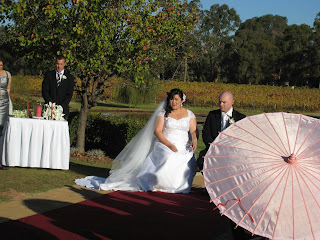 Another occurence that wasn't of the norm was the lion dance performance that took place after the tea ceremony. I love watching the lion dance because it's been awhile since I've watched one. Ang pao giving also occured and some of the guests were given ang paos to place in the lions' mouth. 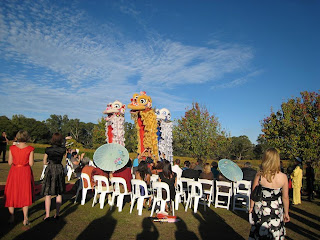 After the ceremony, there was pre-dinner drinks served at the restaurant of the Sandalford wines. There was also little pastry appetisers that was yum! One in particular tasted like tuna, and everyone else thought so too (NOT JUST ME) however it turned out to be chicken and leek. It sure as hell smelt like tuna! 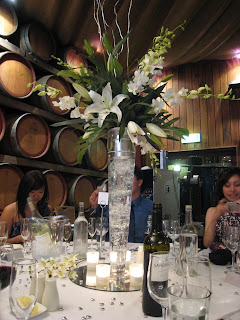 Dinner was a buffet-style meal with a mix of asian and western food to suit the guests! I was placed with most of Alvina's classmates so I was the youngling of the group :P. They were really nice though.

In the middle of the table, a big bouquet of flowers were placed and one person out of every table gets selected to take the centrepiece home and I was the chosen one!! However, I left earlier and I decided not to carry a huge flower vase out the door and gave it to the girl sitting next to me! If you look closely at the table image, there are silver triangles scattered everywhere. THEY'RE CHOCOLATES!!! how cool is that? edible table decos!! Near the end of the night, there was no more silver decos! haha. 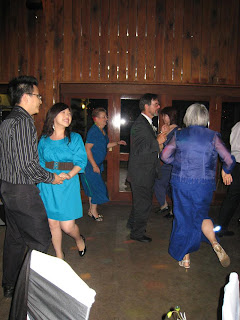 You wouldn't guess who I saw at the wedding...Mrs DAWSON!!!! Does anyone remember her?? Deputy Principal and her click clock heels!!! A pic of her dancing the night away hehe...

The photobooth sure was popular with everyone. Alvina told us that she paid 1500 for it and everyone could take unlimited photos and it prints out two copies of 4 pictures and you get to keep one and you can stick the other one in the guest book. But you can take as many as you like!! 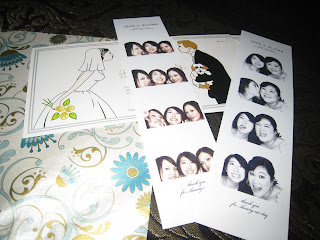 Email ThisBlogThis!Share to TwitterShare to FacebookShare to Pinterest
Labels: wedding

That's a lovely wedding theme! and Mrs Dawson?!?!? Does she still look that scary? hehe!

Mrs Dawson looks EXACTLY the same!!!! She didn't age at all!!

That's so cool! heard you were lucky enough to be seated to my bro lol. Omg, mrs dawson! i can spot her! ithink it's her, still with her short hair. and in her kik kok heels :). loved the photo booth thing. The wedding looked pretty!

Haha yes, I got your message, I said hi back but I'm not sure if your brother passed it on! That's the first time I've spoken to your brother and he didn't know who I was! :)