My very belated blog entry on my trip to Sydney (18-22 Feb ‘09). Last minute decision to head to Sydney as the tickets were only $120 return!! I made a booking at Baysview Boulevard which is a 4 star hotel in the Sydney CBD so it’s pretty much close to everything. The Town Hall monorail station was just down the road. 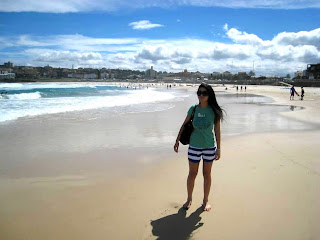 Robbie came to pick me up at the airport with his friends and the first place we went: Bondi Beach! Yess! Ticked off the list of places to go in Sydney! After watching the Bondi Rescue shows, I have to say, it is a whole lot smaller than I imagined it to be, it was quite pretty and when we arrived there wasn’t many people which is great because I don’t like crowded beaches. For Lunch we went to a shopping centre and there was like THREE Westfields all in a row, damn Perth and its small shopping malls. After lunch, Rob’s friends dropped us off at our hotel to settle in. Our room got upgraded from a Deluxe to an Emerald because they ran out of rooms or something which was fabulous!! There was a restaurant upstairs and a gym and a sauna, wish it had a pool or a spa! 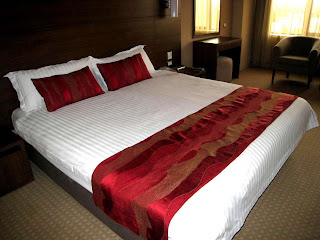 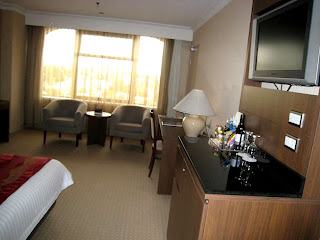 In the afternoon, we decided to go exploring, grabbing a map from the front reception, we walked to Darling Harbour which was like a 15-20 minute walk. We had dinner there and oh our hotel is near Kingscross and it was too early and we only saw the one prostitute and she was fat and ugly, should’ve gone later at night and checked them out. 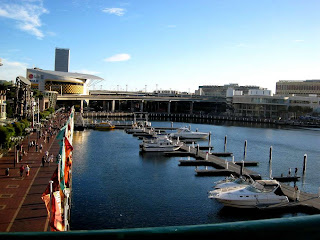 We woke up early in the morning to go to Sydney’s famous fish markets!!! This was not on my list of places to go but Robbie’s friends were going there, so we thought we might as well meet up with them. It didn’t really appeal to me, because I didn’t plan on buying any seafood but I did get some blueberries from the fruit&veg shop that was really delicious and sweet! We got a 3 day monorail+tram pass which basically goes around the city even though it’s walking distance but we just didn’t have all that much time. Paddy’s market! Canningvale market is nothing compared to Paddy’s and above Paddy’s there’s like floors and floors of shopping. Across paddy’s was Chinatown and we decided to have lunch at some random restaurant and we were unlucky enough to pick one where our food wasn’t cooked properly :<. We left the restaurant disgusted. 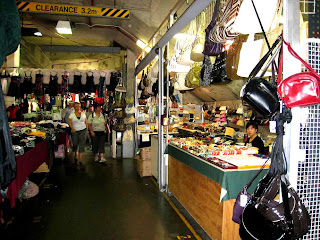 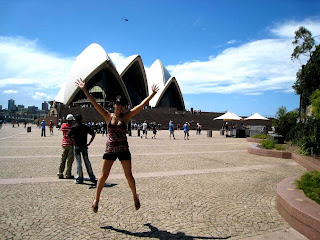 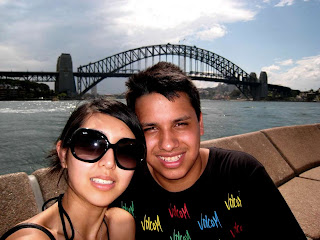 The Opera house and the Harbour Bridge was a must! I didn’t care too much about going in it or on it, I just wanted to take pictures of it! I also wanted to look for a charm for my ‘round the world bracelet. So far I have an Eiffel tower and the Arc de triumphe from Paris, Stonehenge & the Double decker bus from London, a crab, seashell and turtle from Christmas Island. And now the harbour bridge!! From Sydney. 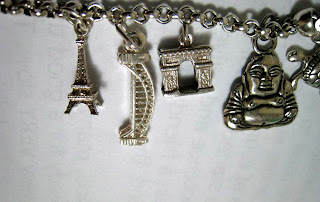 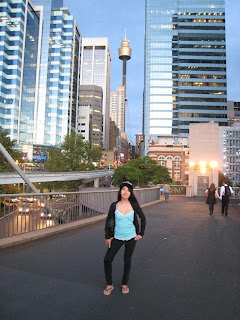 We also went to the Centrepoint tower, there’s a rotating restaurant upstairs but we didn’t end up going to eat there and we went to the Aquarium instead, The Sydney Aquarium was a big disappointment. Why? Because they advertised a glass-bottom boat ride and touch pools which were closed!! But I suppose the famous dugongs were alright. Here’s a video.

For dinner, we decided to try the restaurant above our hotel. Food wasn’t all that great and I decided to have an Apple Martini and it tasted like pure vodka diluted with water. I could not smell the apple flavour so Rob finished it off for me and when he went to the toilet, this waiter comes up to me and goes, boy you must have liked the apple martini!! I was like, no not really, it was too strong, to be honest. And he goes ‘so strong that you finished it off in 5 seconds?” haha..”No, my boyfriend finished it” 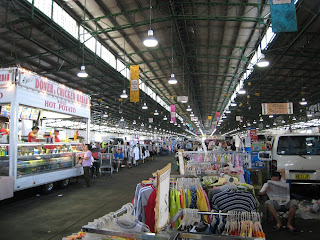 Paddy’s Market located in Flemington is like hugee! I love markets! Bought all sorts of useless cheap things. After we finished shopping, we went to Rob’s family friends’ place and they took us to a restaurant at some yacht club and the food there was delicious! I had the fish of the day, I can’t remember what fish it was, but it was really good. The family is Polish and I learnt how to say how are you? and I am fine. In polish it’s “Jak się masz?” which sounded to me like “Vash she mash” and “dobrze” which sounded to me like “dobsha” although I could be completely wrong! After dinner we headed towards Chinatown because Yueh Lai told us that there was market night at Chinatown on Fridays! Except we went a bit late it was almost 11 and everyone was packing up but there were satays, asian food and all those toys from China. Later that night, Rob’s friend came to stay with us from Canberra.

I caught a cold on the last day!! Arghh! Today we went to Central, and bought Krispy Kremes to take back to Perth. There were a few shops down that area but I prefer shopping centres. We went to Queen Victoria which is where all the posh shopping was like Oroton, Mimco, Bally and Coach. Also went to Gallery Victoria which was under the Town Hall monorail station. I was on the phone with Yueh Lai last night and she was telling me about a place called “Pancake on the Rocks” and coincidentally there is a place called “The Rocks” and the three of us was walking around trying to look for this pancake place because it’s meant to have lots of delicious dessert pancakes. What I didn’t know was, it was located in Darling Harbour and not The Rocks!! We ended up at some café that had dessert pancakes and it was yummy because we were starving looking for this place that didn’t exist! I spent the rest of the day resting in the hotel room, watching the plasma tv while Rob and Phil went out to do their own things. They went to a pool nearby and they bought me a sandwich and some satays that were really nice!

The next day Phil dropped us off at the airport and we flew back to Perth! It was such a fantastic trip, I want to go again!
Posted by Mai at 7:57 PM

your around the world bracelet as that buddah on it... did you visit china too?

nah it's from ebay hehe, cause my parents are buddhist :) there's also a seahorse... which has like nothing significant

that around the world bracelet is a good idea. getting filled. and i feel special, coz my name got mentioned twice :P

WOWWWWWWWWW seems like such an awesome holiday even tho it was so short!!! im going to melbourne for 4 days in august!!! XD hopefully it will be as good XD I LURVEEEEEEE the around the world bracelet idea!!! and the pic of u and rob and the bridge was SOOOOOOOOOOOOO ARORABLEEEEEE!!! XD
<3 u!!!

Haha yes Yueh Lai, you were my unofficial tour guide :)! I'm getting a taipei 101 charm from my brother and hopefully the next time i visit KL, iwanna get a KLCC charm! woot! yay tell me all about your trip to melb felll!!! xx

Hi I somehow stumbled upon your post, but you should know that there IS a pancakes on the rocks at the rocks, and the darling harbour one is a branch of the franchise (:
just thought you'd like to know that incase you visited Sydney again, because it's a beautiful city.

Arghh!! really!? that sucks haha where is it?

It's on Hickson Road.
Here's the website (:
http://pancakesontherocks.com.au
Hope that helped!