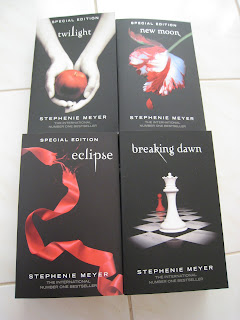 I have been engulfed in the Twilight series for the last few days and I read all four of them religiously around my everyday duties and needs i.e. eat, sleep and shit. I have to say the first book 'Twilight' was probably the worst of them all in comparison to the other three although I think the last book 'Breaking Dawn' was the best however I think it felt more like the beginning rather than the end because of the introduction of all these new characters with amazing abilities yet we aren't able to see them use it, much. It's like having a season of Heroes where all the characters are introduced and then END OF SEASON!! That being said, I did enjoy the series, it very much a teenage romance story, if you're into that stuff. I like happy endings so I enjoyed it muchly. All this buzz about Twilight being the next Harry Potter ---> Harry Potter wins hands down!
Posted by Mai at 5:31 PM

I LOVE the twilight saga woot. way way way wayyyyyy better than harry potter. Coz i'm into these lovey dovey romantic books. lol AHhhhhhhh EDWARD CULLEN!!! my favourite chapter of all is 'Isle of Esme' ;)