We had interesting dinner conversations consisting of tiolet paper talk o.o. which we amused ourselves with. Then the group split and some of us went home, while me and rob, fel and taz wen to timezone and the others went to carnegies where we met up with them later. The music was good and loved the atmosphere :). Had a toblerone cocktail and went home. Really awesome night, thanks to everyone that came! ^^;
Posted by Mai at 7:05 PM 4 comments: 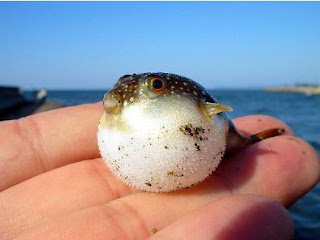 As the heading says it all..all we managed to catch were blowies!
Posted by Mai at 9:18 AM No comments:

Heath Ledger passed away at 3:30pm, US time.
28 years of age.
Left behind his two year old daughter.
Such a tragic loss.
My deepest condolences to Heath's family.
May you R.I.P.
Posted by Mai at 5:09 PM No comments:

Ok, so my fish decides to turn up today...even though yesterday i was waving the fishing net around to see if there was any movement...and there wasn't for a whole day and now it's there like back again LIKE NOTHING EVER HAPPENED...weird, friggen messing with my head!
Posted by Mai at 5:50 PM No comments: Went to watch 27 Dresses with Yenpole and Hm! It's such a chick flick but I love a good chick flick and Katherine Heigl is such a good actor! And that James Marsden is rather good looking, he looked really familiar and I just found out he was in Superman returns and he played cyclops in the X-men series! There was this lady at the movies that laughed really loud and everyone would laugh at her, it was pretty funny. I'll give it a 7/10!
Posted by Mai at 11:41 PM 2 comments:

(Random pic of a sucker catfish)
Goodbye Mr Suckerfish. I have no idea what happened to my new pet fish, it has TOTALLY disappeared from the fish tank, my guess is, it jumped out of the tank and jumped into hiding, never to be seen again. :< *sigh* it was an active fellow and it liked to play chasey with the other fishies! May he rest in peace! He will be missed dearly.
Posted by Mai at 5:06 PM 1 comment:

New job for the new year

Robbie picked me up in the morning, went to work together weeee~! It was alright, get to sit down and type stuff in, get paid more than city beach and do less work :)
Will only be working full time for the first three days though, and then til 2pm everyday until Uni starts :P Getta make deliveries to nearby clinics and get fuel reimbursements as well as getting paid pretty cruisy! :D woot! gonna make lunch tomorow but, spend way too much on take out! WEEEE!~
Posted by Mai at 7:47 PM 2 comments: Weif and I on New years Adam and Yuets in the backseat ;) Me with a ninja girl Adam's attempt to ride a bike Waves at the cove My 5 days on the island seemed to zoom by rather quickly. I left my dear friends behind whom I miss very much, but I am delighted to see my beloved boyfriend back in Perth!

The Plane trip was rather lonely, and to make things worse, I had to travel via Cocos Islands bLahh!! 7 hours on a flight, no fun! The weather on the island hasn't been at its best! Big waves, leaving the ship stranded in the ocean and no jetty jumping for me! On new years, the waves were HUGE!! It died down just as I was leaving the island though. Great timing. A New year, a New diet To see the diet plan for the rest of the week, Click here

Random fact:
One of the few celebrities to get a tick of approval from scientists was chef Jamie Oliver, who correctly told the public about how a chemical found in chillies can speed up your metabolism.

A Moscow woman set fire to her ex-husband's penis as he sat naked watching television and drinking vodka. The couple divorced three years ago but continued to share a small flat.

CLICK HERE FOR MORE
Posted by Mai at 12:47 PM No comments:

Spent new year's eve out on the front porch of yuet's house while the gloomy weather embraced us with its chilling winds and tears of rain. :P

Adam had to go to pray and agnes had ditched us for yan's party so me, weif and yuets went to the school and listened to music until Adam was ready.

The beeping started at the schOol, and the rain pelted on us almost the entire time we were driving. Went past the cove and the waves were humongously high and sprayed each car as they drove past beeping away into the silent houses that greeted us.

30 cars we counted, 10 less than last year, an extra 2 hours had been added on to my day due to the time difference so i was extra tired. By the time we reached silver city i was half asleep, went home and went to bed.

Happy New year guys, hope you all had a blast :).