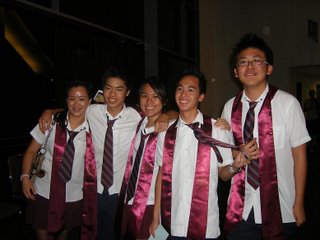 Leavers 06'
Willetton Grade twelve students of 2006 graduated last night.......whoa the ceremony was so long...i was so hungry ^^; ahhh the walk was too long but i liked the video at the end...and the music.
The man sitting next to me made funny comments like; there was this chubby guy graduating..gettin his sash and someone in the crowd went WOOOOO! and the man's like "His mum is here" or there was a japanese dux and the student that got it was yellow skinned and the man's like "He's Japanese anyways" Ohh and the crowd was laughin when Bonner said "artz" because it sounded like "arse" because he has an accent...and he was like "and the student will hopefully pursue a career in the "arse"" and everyone is jush laughing teheheheh.... uhh yeh pics.. 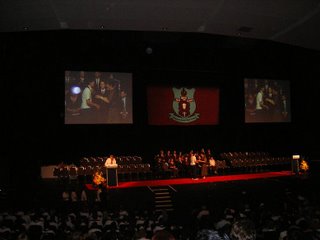 thats jian on the bigscreen o.O 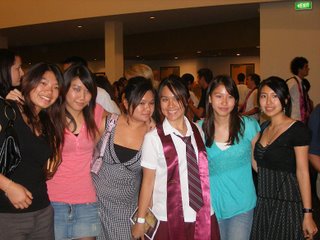 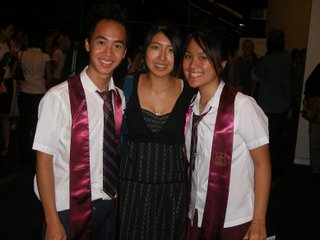 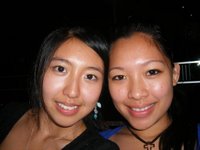 Malibuuuu in perth
After the graduation, went to Billy Lees to eatttt! Oh and made yuets get me bubbletea hehehe... 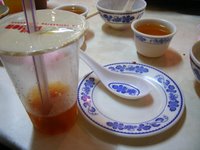 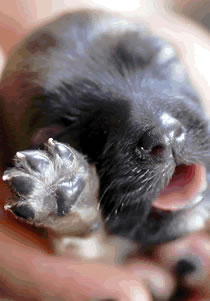 Ahh it's been awhile.

Update: Have been studying bulk for the last week or so ...ONE MORE EXAM LEFT on monday and I think with each exam, the studying get slacker...and I am just so sick of studying o.O
Say yee chuckd an 18th bday party last night and Winnie and I were like the first ones to arrive at the party and we were like 30minutes late. o.O (besides sayyee n lynna) and it was sooo emptyyy!! Got a bit lost on the way there, went in a huge circle around the oval :D:D hehehe. There were curry puffs and spring rolls, couldve done with a bit more snacks lol.
Yeah so the hall was pretty empty and then people started coming late-ish... and there were a few people dancing in the middle and there was like so much more people standing outside than there was inside o.O Music was good at times and the lighting and smoke machine was awesome. Got to see everyone again which was good...SU YUAN WASNT THERE! someone said everyone was there... ahh yeah.. 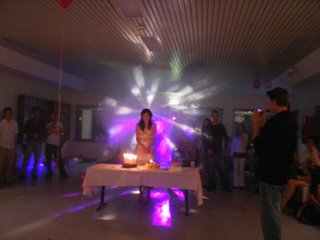 Highlights of the party: Say Yee getting cake all over her face, hair and dress. hahaha.. took a good shot of it. What a waste of a cake! 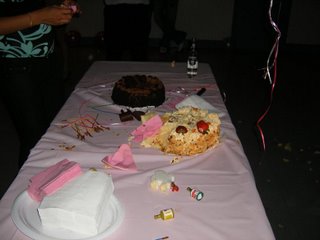 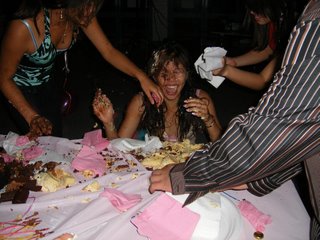 hehehe... other stuff that happened...

*WINNIE STEPPD ON MY TOE n it started bleeding ...


few pics from the party 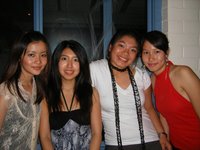 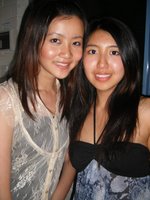 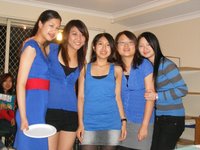 Yes, please refer to weifs, kahseans, huoymins and yuets blogs for what a gorggeous weekend i had... Um things to mention... i nearli got hit by a bottle whilst walkin in northbridge...it smashed to a million pieces in front of meh...hehe... Um um... OMG so much yummy food at lynnas, if we had stayed i wouldve ate em all hehehe... we licked bartsimpsons ass...(me n ks) paramount line was long...mardi gras...parade or function at metros... so went to church ...not my typa music...weird sleazebags trying to get closer to us...realli funny because we all migrate away from the sleazers... 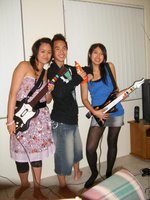 That was fun! played guitar hero ! omg i want the game hehehe... HUOYMIN SO GOOD...but but SHIRLEY EVEN BETTER...she claims it was her first time playing... i have my doubts... delicious food..steak, sausages, chicken wings, salad and bread....uhhh cept maybe the cake...not a big fan of alcoholic cake.. sO many blue ppl... www.myspace.com/maibuzz comments on my pics from kahseans !! woOt.. erm had to go home earli to finsh off an online quiz ..

Went to the high road orthodontist, xrays were sent back to him, OMG ITS SO UNFAIR KAHSEAN DOESN'T NEED TO PLUCK ANY TEETH OUT! and and i need to :( the ones next to my canines...and my bottom ones...eeep IM GONNA hAVE A GAP HOW GAY!!! and and i have hidden wisdoms zomg gaygaygaygaygay .... 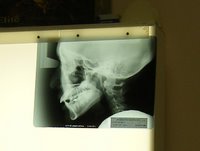 Lateral Cephalostat - Look how much my teeth sticks out ewww

Orthopantomograph - that little bright white speck is my metallic filling

We had our photos taken of our teeth today and below is a picture of kahsean showing us the different colour bands we can have woOt...i want rainbowww hehehhee... WE CANT KEEP THE XRAYS...but i have one of mine atm coz i need to show the dentist the xray wen he plucks my teeth... 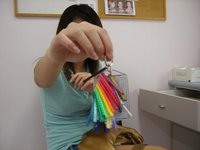 mmyes need to book an appointment to pluck teeth poo poo... Back to the enormous workload i have to do for uNi blehhh... cant wait til uni is over gosh i need a break! good luck to everyone that has exams now and good luck for ur studies !! hope youse alls doo wells

And thats all for now, folks..
take kare y'all